Solutions that protect businesses from fraud at the point of transaction.

Fraud is a pervasive problem that affects organizations of all types and sizes. Often, the victim doesn't know that their business has been hit with a fraud loss until well after it has already occurred.  Many times, the loss isn't discovered until days or even weeks later when reconciliations are conducted, or they are notified of a charge-back or a bank deposit adjustment.

One of the top reasons many of our clients reached out to us in the first place is because they had just learned they had been victimized by criminals through fraud. In many cases - adding insult to injury - the clients suffered multiple losses because the criminals realized there was a vulnerability to be exploited and they hit that vulnerability over and over.

Criminals have a variety of different methods with which they can defraud your business. Some of the more common methods include:

Easy access to advanced technology and the growing number of serious data breaches every year has made it both convenient and inexpensive for criminals to get into the fraud business.

Some international criminal organizations have been abandoning the drug trade and entering the counterfeit money production trade because it is much more profitable to do so.

Since 2000, we have helped tens of thousands of businesses – from retailers to banks to restaurants – detect fraudulent transactions before the transaction can finish.

Our goal is to give businesses the ability to protect their profits from criminals who have the means to fraudulently take them away.

Two of the more common methods criminals use to commit fraud are through counterfeit payments or counterfeit identity documents. To create a comprehensive plan of fraud prevention, our products protect businesses on two main fronts: counterfeit detection and identity authentication.

Counterfeit detection refers to products that are designed to detect counterfeit payments – such as money and credit cards – as well as counterfeit identity documents.

Say a 'customer' pays for goods or services using counterfeit money and you don't have the ability to detect counterfeits at the time of payment. You are not going to figure out you've been duped until it is far too late to do anything about it.  By the time you deposit your cash receipts into your bank, the 'customer' is already long gone.

Did you know that as much as $3.4 billion currently in circulation is actually counterfeit money?

No business wants to lose a single cent to fraud.  Our counterfeit detection products make sure that you never have to.

Over the many years we have been in the fraud prevention business, we have refined our line of counterfeit detection products to be so effective that most customers find that they pay for themselves rather quickly and, in many cases, end up paying for themselves many times over.

We know how to detect counterfeits, how to set up an effective counterfeit detection program at the point-of-transaction, and most of all, how to save your business from ever suffering the effects of counterfeit fraud.

FraudFighter has developed a suite of advanced identity authentication solutions in response to the changing needs of our clients.

We distinguish "identity authentication" as a separate category of product solutions, even though some of the FraudFighter product line are capable of verifying ID documents, credit cards, currency notes and more.  This separation of products simply acknowledges what most of us are already well aware of - that identity theft is an epidemic that is only going to get worse. As such, identity fraud prevention requires a singularly focused set of tools and solutions.

The past several years have seen an increase in the number major data breach events. As a result, identity fraud has grown at an alarming pace.  Between 2015 and 2016, identity fraud grew by 16%.  2017 once again saw record numbers, as 6.64% of US consumers became victims of identity fraud, an increase of almost one million victims from the previous year.

As more and more identity information ends up in the hands of criminals, businesses find themselves under assault.  FraudFighter offers our clients a simple method to defend themselves - authenticate the identity credential document.  The PALIDIN solution enables automated forensic identity document authentication to be used at the point of transaction, real-time, with a result returned in just seconds. 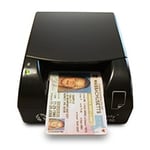 NOT SURE HOW TO PROTECT YOUR BUSINESS FROM FRAUD?