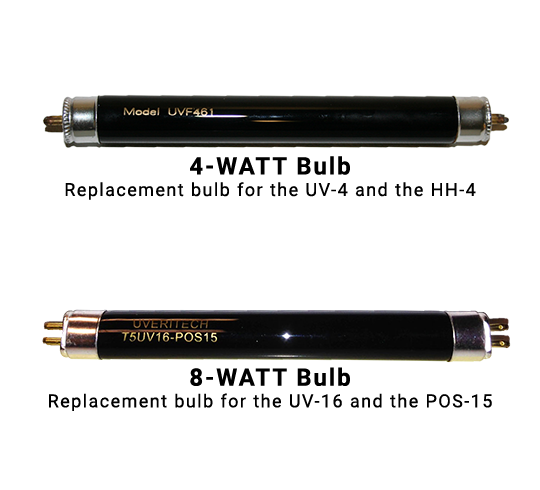 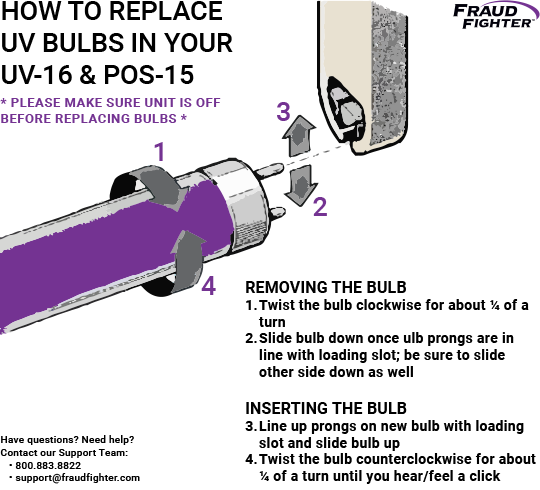 • Can I use another 4-watt bulb that I purchased elsewhere as a replacement for the UV-4 or the HH-4?

The 4-watt bulbs used by some FraudFighter products are manufactured at our facility with the highest quality standards. As with all replacement parts, it is important to select a part with the same high quality as the original. For this reason, we recommend that you buy your replacement 4-watt tubes from FraudFighter.

In some FraudFighter fixtures, you will see the part number F4T5 printed on the bulb. This is a standardized part number which is fully interchangeable with the UVF-461 number we produce in our factory.

• Can I use another 8-watt bulb that I purchased elsewhere as a replacement for the UV-16 or the POS-15?

Replacement bulbs for the UV-16 and the POS-15 must have part number T5UV16-POS15. The use of any bulb part number other than T5UV16-POS15, including the UVF861 bulbs sourced from unauthorized dealers, would invalidate the warranty on your UV-16 or POS-15 and could be hazardous.

• Why will using a replacement bulb that does not have the part number T5UV16-POS15 invalidate my warranty on the UV-16 and the POS-15?

There has been an issue with the trademark of part number UVF861 (the original part number for T5UV16-POS15).

In 2003, UVeritech, Inc., the parent company of FraudFighter Products, began to manufacture and sell the UVF861 bulbs to our clients. These bulbs were produced by us for use in our UV16 and POS15 ultraviolet counterfeit detection machines. To our surprise, in 2012, the U.S. Patent and Trademark Office (USPTO) issued a trademark registration for the mark, UVF861, to a Chinese company. This was more than 9 years after FraudFighter had begun using the UVF861 mark in public commerce. FraudFighter challenged this registration, and filed a lawsuit with the USPTO to cancel this trademark registration.

On June 29, 2015, the USPTO rendered its decision in favor of FraudFighter. The trademark under the other party’s name is cancelled, and,

“Based on the record, we conclude that, as between Petitioner’s and Respondent’s competing claims to own the mark UVF861 for light bulbs that is the subject of the registration, Petitioner (sic: FraudFighter) is the owner. (Trademark Trial and Appeal Board; UVeritech, Inc. v. Amax Lighting, Inc., Cancellation No. 92057088)

During the nearly 3-year period in which the USPTO matter was underway, because we did not know how the case would ultimately be decided, FraudFighter chose to use a new part number for the UVF861 bulb. This new part number is T5UV16-POS15

PRODUCTS THAT USE UV BULBS 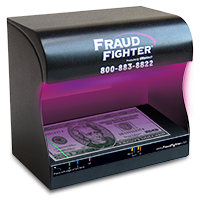 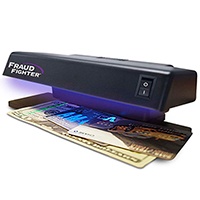 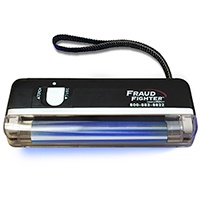 HH-4
Our automatic counterfeit detectors can save you valuable transaction time! | Learn More >